Methane (CH4) is predicted to cause as much global warming as carbon dioxide (CO2) over the next 20 years. Traditionally the global warming potential (GWP) of methane has been measured over 100 years. The IPCC’s Fourth Assessment Report (IPCC 2007) warns that this under- estimates its immediate impact. Viewed over 20 years it has 72 times the GWP of CO2.

The current study was prompted by concern about these emissions, and by a recent Government policy study in Melbourne, Australia, which recommended composting of municipal waste. Melbourne has not run out of landfill space, and has best-practice landfills with methane gas extraction. The mass composting of waste would reduce landfill gas, currently used as a fuel.

AIM OF THE STUDY

A spreadsheet was set up to compare emissions of methane, nitrous oxide and anthropogenic (man-made) carbon dioxide from compost, landfill and incineration, based on IPCC figures. The IPCC model allows for differences in temperature, humidity, dryness and aeration in the landfill, and different types of organic waste. Melbourne (Australia) was used as a case study for the spreadsheet 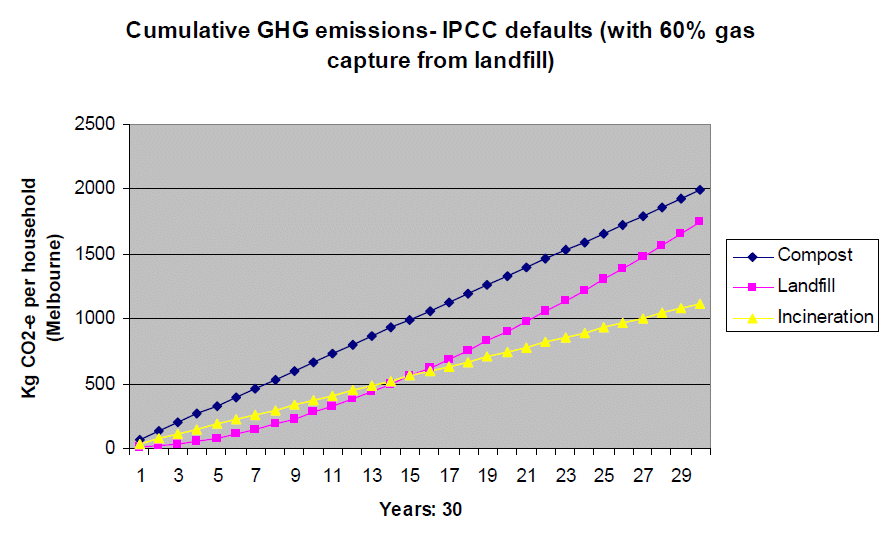 Over the next 30 years, incineration produced the least greenhouse gas emissions, followed by landfill with gas extraction. Surprisingly, aerobic composting produced the highest level of emissions.  This is based on the assumption that landfill has leachate and gas capture pipes, as is now common in Melbourne, with 60% gas capture. We assumed that 10% of the escaping methane was oxidised as it passed through the soil cover, and some waste would break down aerobically before anaerobic conditions were established. IPCC estimates for CH4, N2O and anthropogenic CO2 emissions from composting and semi-continuous fluidised bed incineration, were compared with the landfill emissions.

The results supported earlier studies by Pipatti and Savolainen (1996) and the Hyder Study of waste options for Melbourne (2007).  Both found that incineration was in fact the best option for reducing greenhouse gases. Anaerobic digestion of wastes for methane would work well if 100% of organic waste could be separated, but this is unlikely to happen in reality. Pipatti and Savolainen found that the second best option was landfill with CH4 used as fuel. Our study supports this finding.

It is possible than in 30 years time a solution may be found to methane escaping from landfill, or that energy prices will be so high that landfill is mined as a fuel. So the predicted longer term emissions from landfill may never eventuate. Diverting organic waste to compost now, without capturing emissions from the compost, may be counter-productive, merely hastening the melting of Arctic and Antarctic ice.

An earlier, more detailed study of the options for Melbourne’s municipal waste, suggests that the goal of diverting waste from landfill is over-emphasised as Melbourne has adequate landfill space, and more is created by quarrying activities. The huge volume of poor compost produced if all household waste is composted may lead to a collapse in the market for compost.

both purposes. The priority is to compost rural and animal wastes which currently do not go to best practice landfill and may be releasing large quantities of CH4 and N2O.

In Melbourne, the Metropolitan Waste Management and Resource Recovery Strategy (MWMS 2008) examined several options for solid waste management in 2008 and produced a policy this year.

Melbourne households are already supplied with two bins, one for recyclables (bottles, cans, plastics, paper) and another for residual waste. Suburban households often have a third bin for garden waste. Australia has a policy of minimising waste to landfill. A study of residual waste in 2005-6 found that 41% was food waste, 18% green waste and 6% paper – all organic waste which could be composted.

Hyder Consultants (Hyder 2008) were employed to carry out a study. They found thermal electricity generation performed best in all areas, even reducing air pollution because it would replace highly polluting brown-coal-fired energy, which is the current source of Melbourne’s electricity. Burning the waste would also reduce GHG emissions by eliminating methane from landfill. However it rejected the option of incineration because of community concerns and difficulty in siting the incinerators.

Compost: it found anaerobically digested, separated wastes produced the best compost, and produced 80-100kWh of energy for every tonne of waste. But not all organic waste would be removed from landfill; there would still be methane gas escaping. The MWMS study therefore favoured Advanced Waste Treatment, with all residual waste including garbage composted. This produces stabilised landfill and poor quality compost. A submission from Boral, the managers of Melbourne’s Western Landfill (Boral submission 2007) and also involved in composting at the Pine-Gro composting plant, suggested the compost from mixed residual waste would be unsalable, and would probably go to landfill.  Anaerobic treatment of mixed residual waste is difficult because of contaminants (Fulhage, 1993). The Hyder study found it would produce no net energy and in fact slightly cost in energy.

Our present study aims to objectively compare the options for waste disposal. It uses the United Nations Framework Convention on Climate Change (UNFCCC/CCNUCC) “Tool to determine methane emissions avoided from disposal of waste at a solid waste disposal site”, version 4, 2008 (“the tool”) to compare methane generation from landfill versus aerobic composting and GHG emissions from incineration. Equations and background information from the 2006 IPCC “Guidelines for National Greenhouse Gas Emissions”, Vol. 5 “Waste”, Chapters 2 – 5 and Vol.2, “Energy” were also used.

The following factors are used to calculate methane emissions:

Altogether, only a very small amount of potential methane escapes from best practice landfill, and it is produced very slowly, as the decomposition rate in a dry temperate climate is only about 5% per year. Aerobic composting produces mostly CO2, but also releases a small amount of methane (the IPCC default estimate is 4 grams of methane per kilogram of organic waste).

The top chart shows maximum expected GHG emissions for managed composting. These are likely to be found in a warm climate, where compost is kept wet. The second chart shows the IPCC default value for compost. The third shows minimum values, probably inapplicable to Australia. Much of the IPCC’ referenced data is from Scandinavia and Finland where it is very much colder than Australia and so little methane is produced.

Methane and N2O emissions from poorly managed composting may be even higher than those shown in the top graph. Bert Metz (2007 IPCC) points out “CH4 and N2O can both be formed during composting by poor management and the initiation of semi-aerobic (N2O) or aerobic (CH4) conditions; recent studies also indicate production of CH4 and N2O in well-managed systems (Hobson et al 2005).”

The above graphs assume a methane correction factor (MCF) of 0.6 for landfill, i.e. it is 60% anaerobic. The IPCC recommends this value if it is not known how the waste is managed. If waste is unmanaged in a shallow tip, the MCF value is 0.4, as much of the waste will degrade aerobically. If the waste is buried deep or the water table is a high, e.g. if it is dumped in a swampy area, a value of 0.8 is used. If it just compacted or levelled and covered, the MCF is 1.

In the 1996 IPCC Guidelines, all managed waste was assumed to be 100% anaerobic (an MCF of 1). This was a heroic assumption. It requires only very low levels of oxygen in the waste to produce some aerobic decomposition, especially before anaerobic conditions are established in the waste (see Metz, IPCC 2007). A recent Swedish study (Smars, Sven and Beck-Friis 2002) found some aerobic decomposition in waste was still occurring at 1% oxygen levels.

In the 2006 IPCC guidelines a new category of semi-anaerobic landfill has been introduced with an MCF of 0.5. This type of landfill has leachate drainage, gas capture, ventilation and permeable cover. In Melbourne, landfill sites typically have leachate drainage and gas capture. It is uncertain whether the tip cover is permeable. (It is not intended to be, yet it is estimated that 40% of the methane escapes through it.) The subsoil is extemely dry, relative to Europe and Scandinavia. This would tend to allow oxygen to penetrate.

Further studies are required to establish how much decomposition occurs before landfill conditions become anaerobic, how much oxygen is found in landfill gas and what the real MCF is in Melbourne. The Australian Government Department of Climate change still classifies all landfill in Australia as 100% anaerobic on the grounds that it is “managed”. This follows the classification in the now superseded 1996 IPCC Guidelines. More up-to-date estimates are needed.

WHY DO THE RESULTS SHOW HIGHER EMISSIONS FOR COMPOST RELATIVE TO LANDFILL AND INCINERATION THAN ARE GENERALLY ASSUMED?

Much of the widespread understanding of GHG emissions from landfill, compost and incineration is based on early modelling in the 1996 IPCC Guidelines. Since then it has been discovered that:

The 2006 IPCC Guidelines’ assumption of 50% carbon storage in landfill is conservative. The IPCC also conservatively assumes that only 10% of methane is oxidised in soil or compost cover of landfill: the USEPA (2002) puts it at 70-85%. Finally our study assumes 60% of landfill gas is captured but Metz (IPCC 2007) states that gas capture may be 90% or more.

There are still many unknowns but assumptions in this study are probably conservative.

Incineration produces the least GHG. According to the Hyder report 2007 it would also produce less of other kinds of air pollution and more green energy than other options.

Note that the IPCC considers only CO2 from burning fossil-fuel based wastes to be anthropogenic (man-made). CO2 produced from burning organic waste is not counted. It would occur anyway in nature, whether the waste material oxidised slowly in decomposition or quickly in burning. CO2 emissions from composting and landfill are also not counted. As the global warming potential of methane and nitrous oxide is much greater than that of CO2, including non- anthropogenic CO2  would make little difference to the results.